Each year ends with a bang. You’ll have the end-of-year festivities and people party themselves into the New Year. But when it’s about movies, this one created an end-of-a-film-year-bang. Frankly, I didn’t expect too much of it. But maybe my prejudice about Sandra Bullock has something to do with that. I readily admit that I’m not really a fan of this actress. Is it her way of talking? Or her facial expression? No idea. But I have already avoided a lot of films just because of her being in it. But for her acting performance in Bird Box, she deserves a standing ovation. 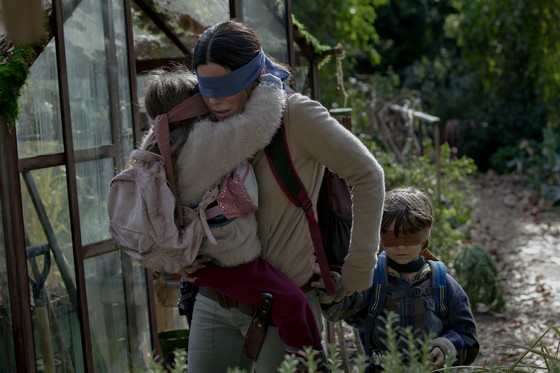 Brilliant how Sandra Bullock plays her character, Malorie. A free-spirited woman who’s on her way to becoming a single mum. All indications point to her being a cynic who prefers not to have too emotional bonds with others. Even the way she talks about her unborn baby shows how aloof she is. Even the two children, with whom she makes the dangerous boat trip, are still called by the names “boy” and “girl” after 5 years. Is it pure selfishness? Or self-preservation? Or fear of commitment? Probably. But as the film progresses, you’ll also notice that she has other character traits that make her more human. She stands her ground, shows understanding, defends others and shows how vulnerable she is herself. So thumbs up for Bullock, even though she looks more and more like Michael Jackson.

But it’s not just the acting of Sandra Bullock why this film entered my list “best movies of 2018”. The film itself impressed me. It’s that constant feeling of threat, helplessness, and fear that you get while watching this film. Inevitably one will compare Bird Box with A Quiet Place. In this film, the survivors had to produce as little noise as possible, because those who have conquered our beloved globe have a pair of sophisticated ears. Every sigh or groan can, therefore, be heard by them over kilometers, with the result that the person who produced the sound can’t do this a second time. In Bird Box, looking is already fatal. That’s why a lot is being blinded with newspapers, curtains, and blindfolds. An advantage for the pregnant among the survivors. No problem to be noisy while giving birth.

You can see this film as a fusion of A Quiet Place and Cell. Just as there’s chaos in Cell after a telephone signal has changed those who were on the phone into murderous psychotics. In Bird Box it’s when looking at something unknown that all hell will break loose. In this film, I found that moment more frightening and more breathtaking. When I watched Cell, I was slightly disappointed about that moment. Perhaps because I also read Stephen King’s book and King wrote it in such a brilliant and unparalleled way that it was impossible to film it. After the general mass hysteria where a lot of suicides are being committed, we see how a group of random people is entrenched in someone’s home. Soon they are confronted with the known problems. Their food supply is shrinking so they are forced to go outside to resupply. A hazardous undertaking that provides the necessary tension. There’s also the constant threat of falling prey to the unknown danger. Or people who seek help (or something else) knocking at their door.

Most criticism will probably be given to the fact that the phenomenon that causes a global suicide wave can’t be seen at all. Apart from some wind, shadows, and leaves that appear to be floating motionlessly in the air, there’s nothing to see. Is it an alien invasion? A failed scientific experiment? A virus? A social media syndrome? No idea. And weird but true, even that didn’t bother me. It stimulates your curiosity and makes you feel the same way as the victims. A feeling of helplessness and fear of the unknown. During the entire film, it goes back and forth between past and present. Normally I’m not such a flashback-fan because this usually undermines the pace and mood of the movie. With Bird Box I didn’t have that feeling and the subcutaneous tension remained constant.

It’s clear this film competes for the title “best film of 2018”. Sandra Bullock steals the show and is emphatically present in almost every scene. Also worth mentioning is John Malkovich as the sometimes hard-hearted cynic and pessimist Douglas. Such a person who immediately assumes that his country is in a state of war. So he’s constantly parading around with a gun. There is also Trevante Rhodes who is the absolute opposite of Douglas. A sympathetic fellow who’s helpful and shows compassion. And finally, the two young children who act so natural at certain moments. The moment when a terrible decision had to be made during the trip on the river, was touching and brilliantly acted. It’s kind of obvious. Bird Box left a crushing impression on me. It wasn’t so exciting that I wanted to cover my eyes. But it was a close call! Indeed, a must see.