What caused Osama bin Laden to become the most hated and hunted man on the planet? The controversial drama Bin Laden: The One Man Show asks that question about the once-feared al-Qaeda leader. 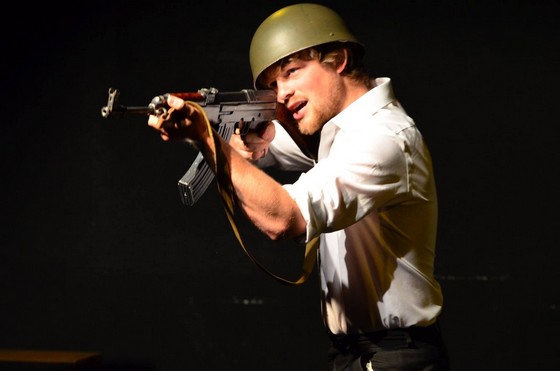 It’s the work of UK’s Knaïve Theatre; specifically writer and performer Sam Redway and fellow writer and director Tyrrell Jones. Redway came up with the concept after bin Laden was killed by US Marines in May 2011. On a train, Redway saw a young boy punching photos of bin Laden, while gleefully yelling “you’re dead, you’re dead”. He spoke with Jones and after extensive research they developed the script. They first staged the show at the Edinburgh Fringe Festival in 2013 and it has since toured Britain and the USA, before heading Down Under.

It’s a step-by-step guide (via butcher’s paper) on how to change the world … from bin Laden’s perspective. You have every reason to query the idea of creating a work that might lend any sympathy to the man responsible for 9/11 and spreading so much hatred and division. I guess the answer is that learning from the past and preventing it from happening in the future is surely a good thing. You can also query what’s even remotely funny about bin Laden. The answer is “nothing”.

The play deals with facts about the notorious man’s life. It combines bin Laden’s self-believed propaganda (as seen through the writers’ eyes) with audience interaction. That’s where Redway injects some humour. Mind you, I couldn’t help but think that bin Laden’s mindset became increasingly twisted. He seemed to quickly dispense with dialogue in favour of armed confrontation. His take on that – as seen in the production – is that the Russians and then the Americans brought it on themselves.

The performance takes you through bin Laden’s life and times. He starts as a lovelorn a 17-year-old, before being radicalised at university. Later, he’s ostracised and has an epiphany that ultimately led to the most horrendous act of terrorism perpetrated on US soil. 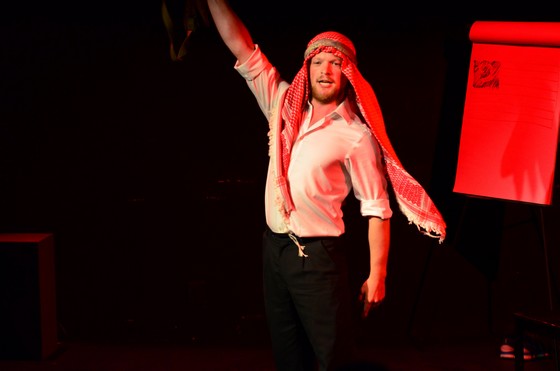 Sam Redway makes for a personable and energetic puppet master. First he wins favour by serving tea and asking what needs fixing in our country’s backyard. The hour-long play ends with a reference to a fictitional manifesto titled “The Flight for Freedom”, a theatrical device used to tell the story. Once the show is over, he invites the audience to stay on and discuss the play. After 45 minutes, the debate between enthusiastic patrons continued to rage.