Oscar winning actor Kevin Spacey’s fall from grace was quite spectacular. Not only was his performance as John Paul Getty in Ridley Scott’s drama All the Money in the World deleted and his performance re-shot with Christopher Plummer, but he was fired from his hit TV series House of Cards and his character was killed off. But one film from that time has survived the purge. The crime drama/morality tale Billionaire Boys Club serves as Spacey’s unfortunate cinematic swan song.

A true story of 80s excess, hedonism and hubris provides the basis for Billionaire Boys Club. In 1983 a group of twenty-something college graduates from Los Angeles established a get-rich-quick investment scheme. It netted them a fortune to finance lavish lifestyles. But it was little more than a Ponzi scheme; and it all fell apart in spectacular fashion. The financial house of cards ended with betrayals, violence, murder and federal indictments. 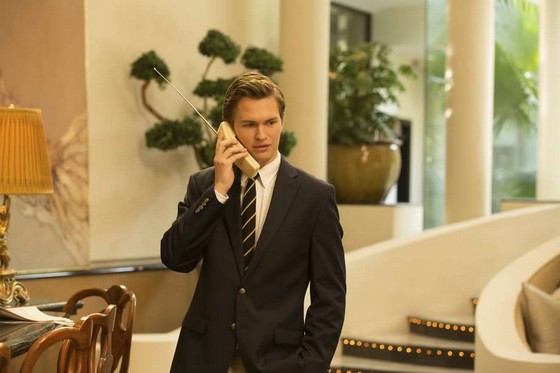 The scheme was the brainchild of a pair of young Turks. Joe Hunt (Ansel Elgort) had a gift for commodities trading, while his best friend Dean Karny (Taron Egerton), was a tennis pro selling luxury cars to wealthy clients. Hunt was something of an outsider amongst his college colleagues though. While they came from a life of privilege, Hunt came from a single-parent working class background. He was only able to afford his college education due to a scholarship. Hunt and Karny initially attracted small investments from the families of other wealthy students.

But it was only when they came into the orbit of Ron Levin (Spacey), a fast talking and seemingly wealthy Hollywood player and friend to the rich and famous, that the Billionaire Boys Club really took off. Levin became Hunt’s mentor and primary investor. But Levin himself was something of a notorious conman and hustler, who eventually swindled an estimated $4million from the club’s coffers. Hunt himself was later charged with killing Levin. Karny turned state’s evidence in exchange for immunity from prosecution.

The story has been previously told in a 1987 TV mini-series which starred Judd Nelson (a former member of the 80s “brat pack” who starred in films like The Breakfast Club) as Hunt. In a nice ironic piece of casting, Nelson plays Hunt’s father Ryan here.

Director James Cox (Wonderland) co-wrote the screenplay with his long-time collaborator Captain Mauzner. Cox spent several months researching the story. He based the screenplay on court documents, transcripts, and several published accounts of the events. This is Cox’s second film in fifteen years, and his direction lacks any sense of urgency. Cinematographer J Michael Munro bathes the film in an 80s aesthetic with montages of fast cars, slick suits and snorting cocaine. But as a tale of financial shenanigans it seems derivative and lacks the insight and texture of films such as Wall Street and The Wolf of Wall Street.

Reunited with his Baby Driver co-star, Elgort brings a slick youthful energy and enthusiasm to his role as Hunt. But he’s a rather unlikeable and selfish, shallow character. Egerton (Robin Hood) also brings energy to his performance, and he is also the film’s unreliable narrator. Spacey excels at playing the bad guy. Here he chews the scenery at every opportunity, camping it up as the duplicitous and egotistical Levin. The character seems dangerously close to the actor’s off-screen persona. With the exception of Emma Roberts as Hunt’s conscience-ridden girlfriend Sydney, the rest of the characters are a rather forgettable lot who leave little impression on the material. They are played by the likes of Jeremy Irvine (War Horse), Thomas Coquerel (In Like Flynn) and Cary Elwes, who appears in a brief cameo as Andy Warhol.

It’s something of a pity that an actor of Spacey’s calibre will be remembered more for his off-screen indiscretions than his many powerful on-screen performances.

Billionaire Boys Club is available to rent or buy on Playstation, Google Play, iTunes and YouTube