Between the Streetlight and the Moon is a new Australian play by, Melita Rowston. It was shortlisted for both the STC Patrick White Award and The Silver Gull Award.

Zadie (Lucy Miller) is an art academic/curator and PHD candidate, the Phd concerning the Impressionist artist Berthe Morisot (1841-1895) and her possible illicit relationship with her brother-in-law, Edouard Manet, has been six years in the preparation. Her supervisor and supporter, Janet (Suzanne Pereira), under pressure from the Academic Board, is pressing for the completion of the work – not a word has been cited. That completion is hinged upon the finding of suspected letters that would substantiate Zadie’s theories. This section of the play becomes the dramatic spine of all else that transpires and has the familiar academic quibbling and propositioning -‘detective work’ – that ‘greases’ the dramatically suspenseful wheels of other works, for instance, like Tom Stoppard’s play, Arcadia, or A.S. Byatt’s 1990 novel, Possession. 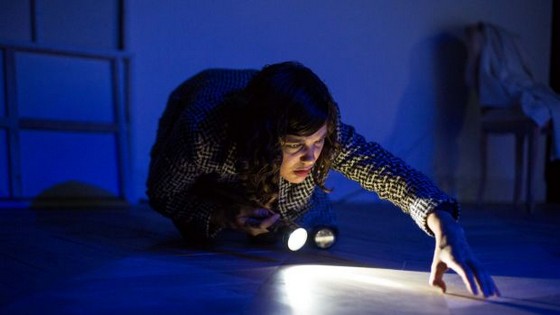 Intermixed is some familiar feminist discussion/politics concerned with the oppression and ‘disappearing’ of the female artist from history and, as we discover is perhaps an active agency still, in the contemporary scene. For, we find that Zadie herself has allowed her own art work to be forgotten and appropriated by an ex-lover, now dead artist, Jeff (Lani Tupu), whilst, in the present tense of the play she is, seemingly, caught in another sexual/work conflict with contemporary spunk/artist, Barry (Ben McIvor) who is now in the thrall, the inspiration of one of her own students, Dominique (Joanna Downing). A lot is going on in the 110 minutes, no-interval play.

The ‘intellectual’ gambits of the writing from Ms Rowston has some substantiality to keep us intrigued, and the florid speeches from the ‘ghost’ memory of Jeff are alluring in their profligate ‘wealth’ of language. And, if sometimes the ordinary interactions between characters in the modern time sound banal and or stilted, especially, in their comic throw aways, one wonders if it is in the writing, or the acting quality? The text sometimes sounds if it is ‘impersonated’ – spoken, recited – rather than personalised with a highly-staked ‘back-story’ and need from the characters, by the actors. The truest moments, when the actor and character melted, each into the other, came with the last Jeff-ghost speech from Mr Tupu. One was urged to listen and imagine, to endow the sounds with a vivid reality and a grasp of inspiration.

I remember having seen Red, the play by John Logan, a play about art, too, filled with similar heightened discussion of art philosophy and aspiration. I was enormously thrilled. Later, I read the play, and worked on it in scene work, and found the actual text so ‘simple’ in its expression that it felt underworked and poorly written. On reflection, maybe, it was the acting by Alfred Molina and Eddie Redmayne, that was of such a high calibre, that they had embodied the ‘stilted’ writing with character conviction, beyond the mere actor’s presence, to make it believable, and not drawing attention to itself, in action. Unfortunately, in this production of Ms Rowston’s play, led by Anthony Skuse, that does not happen often enough to permit a fully subjective identification with all that goes on. 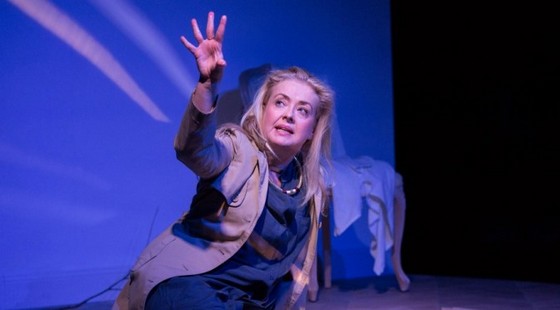 The design, by Jeremy Allen, is a contemporary, slatted wooden ‘gallery’ floor, with a hidden pool of reflected water (presumably, symbolic of the River Seine in Paris), with spare furniture, and two white walls, one used for projection of art and quotations from Berthe Morisot to acclimate us to the world of the ‘hunted’ relationship. Chris Page manages the lighting with a crisp modern arid galley affect. Benjamin Freeman, has composed a score for piano which he plays live, which sometimes is over obvious in its intent and has an unexpected ‘kitsch’ affect.

This production of Between the Streetlight and the Moon feels overlong and disengaged from the passion of the writer’s impulse that grew from a mission to view Edouard Manet’s Olympia, in the Musee D’Orsay, and, instead, been aesthetically arrested by a tiny painting of a woman viewed through the spokes of a fan: a painting by Edouard Manet of Berthe Morisot. One of eleven portraits that left Ms Rowston with no doubt in her mind that his paintings charted a turbulent affair.