Dark and brooding, Bereft by Chris Womersley was my introduction to a writer I met briefly in the Green Room at the Perth Festival Writers Week wrap up. Aptly dubbed ‘Australian gothic’, this tale of a boy who flees his home town after being accused of murdering his sister, returning years later without really knowing why, is evocative and eloquent. 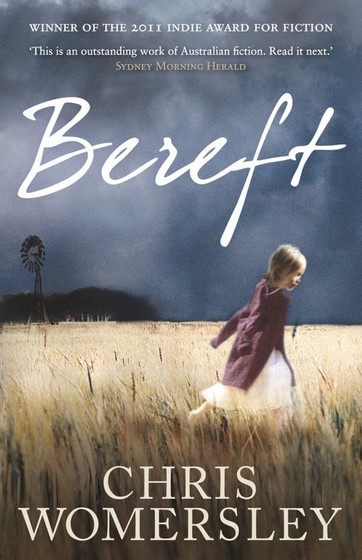 It is 1919. The Great War has ended, but the Spanish flu epidemic is raging across Australia. Schools are closed, state borders are guarded by armed men, and train travel is severely restricted. There are rumours it is the end of the world.

In the NSW town of Flint, Quinn Walker returns to the home he fled ten years earlier when he was accused of an unspeakable crime. Aware that his father and uncle would surely hang him, Quinn hides in the hills surrounding Flint. There, he meets the orphan Sadie Fox — a mysterious young girl who seems to know more about the crime than she should.

A searing gothic novel of love, longing and justice, Bereft is about the suffering endured by those who go to war and those who are forever left behind.

I was drawn in as much by the author’s way with words as the bristling tension between characters and the tale itself. It’s the kind of book where quotes leap out at you and you want to write them down; and where characters stay in your mind long after … I’m still wondering what happened next.

I’m a big fan of gothic-style novels, so this one ticked my boxes and whetted my appetite for more books by Womersley. The sooner the better.

Bereft is now available via Scribe Publications, online and at good bookstores.