Youthful anarchy is at the heart of Beats. This largely black-and-white film is set in a working-class Scottish town in 1994. The story takes place against the background of a British government proposal to ban amplified “beat” music at unlicensed raves. 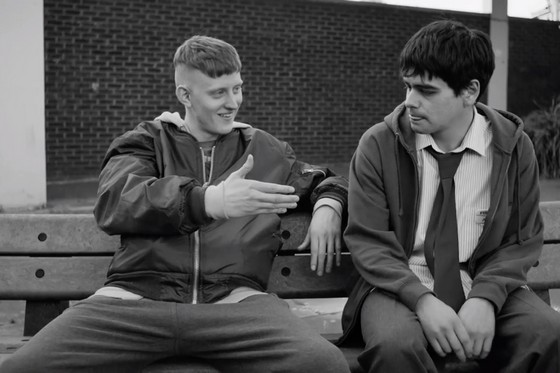 The film centres on the friendship between two teenagers who approach life very differently. Spanner (Lorn Macdonald) looks to be heading down a slippery path. Living with his older brother, a massive bully, Spanner appears to be an irresponsible risk-taker. Johnny (Cristian Ortega) is a wide-eyed innocent whose single mother has taken up with a local policeman. She’s planning to move the family to a better neighbourhood. The groundswell against the proposed new law is growing, and pirate radio pushes for an underground rave. Spanner wants in and drags along a reluctant but interested Johnny. Like Spanner, Johnny is a huge advocate of the intoxicating rhythm of the times. With that Johnny flouts the wishes of his mother and her partner, who want him to cut ties with Spanner, whom they regard as a bad influence. Meanwhile, Spanner finds himself running from his brother on because of something he (Spanner) has done.

Brian Welsh directs Beats from a script he co-wrote with Kieran Hurley. It’s based on Hurley’s 2012 play. The pair worked hard to reconstruct and expand the theatrical version (a single-performer narration) into a bona fide feature film; and that has paid off.

Beats the movie is quite a ride. It felt authentic and raw. It’s about thumbing your nose at the establishment. It mashes a hard edge with an irreverent exuberance. The performances of both the primary and secondary players are convincing.

Especially worthy of praise are Macdonald as Spanner and Ortega as his timid partner in crime. The juxtaposition of their characters works a treat. The impressive cinematography captures the grunge apparent throughout. Director of photography Ben Kracun executes a number of evocative aerials. The decision to shoot all but a few scenes in black-and-white means the film feels like a memory, harking back to a time of idealism. And a picture about beats wouldn’t be complete without a powerful musical score – 30 numbers brought together by Keith McIvor.

Beats is a creative representation of a time and place. Under the skillful direction of Welsh, it left an indelible impression.

Beats is available now on iTunes and Google Play.