Discomfort underpins Beatriz at Dinner, a fable about power, privilege and responsibility.

At an elegant dinner party in a swanky hilltop home, conversation between a soft spoken holistic healer and a hard-nosed businessman and tycoon explodes into a bitter clash of cultures. Beatriz (Salma Hayek), a self-effacing and spiritual immigrant from Mexico, has spent her adult life caring for the sick while neglecting herself. When her car breaks down and she is stranded at a client’s luxurious Newport Beach home overnight, her well-meaning employer Kathy (Connie Britton) insists she join them for a dinner party that evening. 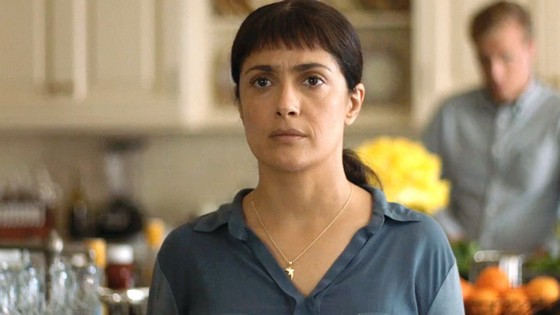 At an intimate and sumptuous celebration of her husband’s latest business venture, Beatriz is introduced to Doug Strutt (John Lithgow), a ruthless billionaire real-estate developer. She listens uncomfortably while Doug brags about his aggressive business tactics, but when he boasts about shooting a rhino in Africa, she can no longer hold her tongue. As opposing worldviews collide over a dinner table, Beatriz’s pent up outrage spills out in a way that surprises even herself.

Beatriz at Dinner is directed by Miguel Arteta (The Good Girl) from a script by Mike White (The Good Girl). The film continues the longtime collaboration between the pair that began when they met at university. From their first feature together in 2000, they have explored the lives of vulnerable misfits with sympathy and respect. White’s most vividly drawn characters have always been outsiders by nature. In Beatriz at Dinner he has created two vastly different outliers who represent opposite ends of the spectrum. “They stand for winners vs. losers … the rich vs. the poor, hunters vs. healers, male vs. female. It (the movie) begins as a comedy of manners and turns quickly into a battle of ideas with a great deal at stake,” White says.

The project began when White, an outspoken supporter of animal rights and a committed vegan, was outraged by the 2015 killing of Cecil the lion by an American trophy hunter in Zimbabwe. He wondered what he would he do if he were ever to meet that man? He began to build a script around that idea. There are elements to like and others to loathe in the execution of Beatriz at Dinner. Highlighting the arrogance and lack of consideration among the well to do in the picture works a treat.

John Lithgow does a fine job as the bombastic, self-serving magnate who cares only about himself. His sidekicks, who play little more than acolytes, are almost as sleazy. The long, ponderous shots gazing into Salma Hayek’s face, with no dialogue but sonorous music, look and feel contrived and affected. In fact, the biggest thing missing from Beatriz at Dinner is subtlety.

I appreciate the unease that is the film’s cornerstone, but a greater deftness of touch could/would have made it eminently more watchable. Decidedly art-house in style, it feels experimental in nature.

Clearly, Beatriz at Dinner, rated M, is a select audience film. It scores a 5½ out of 10.