Writer and director David Pulbrook (Last Dance) has a way to go before being compared to Alfred Hitchcock. The great director’s command of the genre is what Bad Blood seems to be going for, but it falls short. 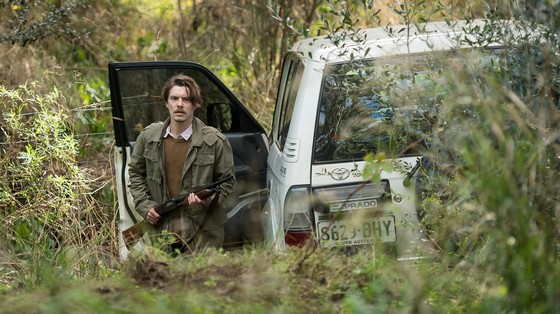 Carrie (Morgan Griffin) is in love with her new fiancé Vincent (Xavier Samuel), a handsome and successful young author. Vincent is besotted with Carrie – she’s everything he’s ever dreamed of. But he’s harbouring a dark secret from his past and now he’s experiencing strange occurrences. It’s almost as if someone is following his every move. But who … and what are they after? When Vincent asks Carrie on a romantic weekend away to celebrate their engagement, cracks start appearing that threaten their happy and secure relationship … and maybe even their lives. It all revolves around identical twins – one good and the other evil – and the lengths one will go to to get back at the other for being the favoured son.

As this film progressed, my mind wondered back to the 1987 pic The Stepfather, starring Terry O’Quinn. Bad Blood started out with promise. It had a relatively auspicious start, but by halfway through had devolved into a telemovie at best. There is a lack of credibility in the plotting … and in the acting by the time we get to the third act. I just didn’t buy what I was seeing. It became a matter of convenience to justify the basic contention, seemingly with reality missing.

At best, it feels like a relatively dated attempt at crafting a pot-boiler. Only, while this may have passed muster 20 or 30 years ago, half-decent filmmaking has evolved beyond that today. No subtlety, no nuance here – simply an exploited situation of being trapped between the devil and the deep blue sea.

Bad Blood should only come under consideration if you have nothing else to do on a rainy day. Rated MA, it scores a 4 out of 10.