Jean (Pio Marmaï) left his family, and his birthplace in Burgundy, 10 years ago. His father and his grandfather before him produced high quality wine. The eldest of three siblings, Jean was constantly fighting with his dad and couldn’t take it anymore, so he set off to tour the world.  Now, years later, he’s back after learning of his father’s imminent death.

He reunites with his sister Juliette (Ana Girardot) and his younger brother Jérémie (François Civil). They hadn’t kept in touch over the years. Jean even failed to attend his mother’s funeral five years earlier for reasons that become clear later. Now he has a lot going on in his life, which, in recent times, has been centred in Australia. There’s no shortage of skeletons in his closet. 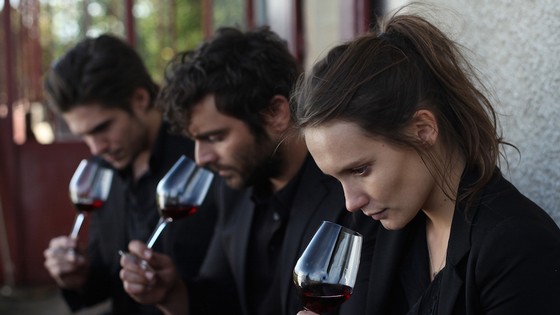 The father passes away just before the harvest begins. The siblings inherit the family home and the vineyards, worth €6 million. But the inheritance tax is €500,000, which they don’t have. So they’re left with a tough decision. They can sell the lot and split the proceeds; or sell off part of the inventory and a few choice vineyards to pay the tax. But only if all three agree. So, it’s all or nothing and each of the siblings faces issues.

The youngest, 24-year-old Jérémie, who is married with a young child, is at first most resentful of Jean. He lives on a property next door to the family’s estate. He and his wife are being smothered by his in-law’ domineering ways.

Juliette is the heir apparent. Her father had been preparing her to take more responsibility in the business, but she struggles to assert her authority and believe in herself. She even locks horns with a strong-willed fruit picker out for what he regards as some harmless fun. Then, of course, there’s Jean. He has very mixed feelings about being back and his head is often in the Southern Hemisphere.

Over the course of a year, in sync with the rhythm of the seasons, the three young adults rediscover and reinvent their familial bonds, maturing, along with the wine they’re making.

With a gorgeous look and feel, it would be difficult not to fall in love with the setting for Back to Burgundy. This is a picture postcard if ever there was one. Further, the film’s depiction of the characters’ dedication to producing the very best wines is intoxicating, if you’ll pardon the pun. The detail so lovingly captured by cinematographer Alexis Kavyrchine is at times breathtaking.

It’s easy to become enveloped in the personal challenges faced by the three protagonists. Showcasing memories and dreams of their youth, interspersed with the present day works is most affecting. I also liked the introduction and portrayal of another central player in the second half of the picture.

I particularly appreciated the layered performances of the leads.

So, co-writer and director Cédric Klapisch (Paris) and wins our sympathies, even if it is often apparent he’s manipulating the action for maximum effect. And while this is true of all movies, it’s more noticeable here. Notwithstanding that though, I was taken and besotted by much of Back to Burgundy.