Director Kriv Stenders (Red Dog, etc) seems like he is trying to set up a series of films centred around significant national holidays. In 2007, he gave us the powerful but bleak, grim drama Boxing Day which told the story of one man’s desperate struggle to try and reconcile his estranged family on this one day; now he gives us this complex, ambitious and multi-layered drama set against the backdrop of Australia’s most divisive and culturally sensitive holiday. The first feature script written by Stephen M Irwin, who hails from a background in television with series like Secrets And Lies, etc, to his credit, Australia Day deals with some heavy themes, like racism, identity, multiculturalism, history and tradition, family, crime and justice, sex slavery, cultural diversity, and it explores the darker heart of our national identity and psyche. Australia Day is Altmanesque in its structure as it weaves between three different narrative strands to follow the journey of several characters whose lives are altered by the events that unfold over the course of one hectic and tragic day.

April Tucker (newcomer Miah Madden) is a 14-year-old aboriginal girl who is involved in a car crash while trying to flee the murder scene that has left her abusive father dead. Police officer Sonja Mackenzie (Shari Sebbens, from The Sapphires, etc), who is of aboriginal heritage herself, is driven by a sense of guilt to try and find April before the rest of the police force do. She was frustrated by her inability to get the authorities to remove April from a toxic environment. She goes against the orders of sergeant Collyer (Matthew le Nevez) and pursues April through the city’s underbelly while April herself is trying to find her mother amid the city’s marginalised population of homeless and drug addicts. 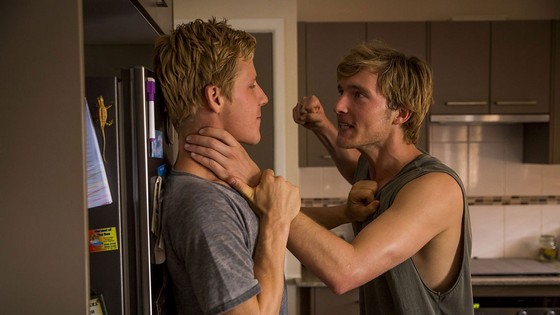 Sami (feature film debut for newcomer Elias Anton, from the tv series Barracuda) is of Iranian descent and lives at home with his mother and older brother. But then Sami is falsely accused of drugging and raping a white girl in Chloe (Isabelle Cornish), he is abducted by her vengeful, racist brother Dean (Sean Keenan, from Puberty Blues, Is This The Real World, etc) and brutally beaten.

Lan (Jenny Wu) is a young Chinese girl who was brought into the country under false pretences and forced into a life of prostitution. She manages to escape from the brothel and her vicious bosses. She is helped by Terry (Bryan Brown), a former Vietnam veteran who comes to her recuse when he sees her wrestling with man on the street. Terry is a farmer who has just lost his farm to the banks and has come to town set on a drastic course of action. Reluctantly he is drawn into Lan’s world of sex slavery and violence.

Stenders’ films have often had a darker undercurrent, and Australia Day is no exception. With this film, Stenders and Irwin are making a bold political statement, and they question what it means to be an Australian in today’s multicultural society. Australia Day highlights the underlying tensions and inherent racism that are accentuated by the celebrations surrounding the controversial holiday, and the film’s broader themes have a topicality that will resonate. The film itself is more potent in exploring this disconnect between the holiday and the marginalised Australians who feel like outcasts in their own country than last year’s comedy Down Under.

Like the 2004 Oscar winning film Crash, Australia Day weaves between the various narrative strands, and the personal stories intertwine in unexpected ways. The film has been deftly edited by Nick Myers (Paper Planes, etc), who brings a sense of energy to the material. Stenders maintains a fast pace throughout the material. There are lots of coincidences in the elaborate setup though, but audiences don’t really get time to ponder them until the final credits roll.

Stenders also draws good performances from his key cast. Brown delivers his usual solid performance, and he brings a suitably gruff and world-weary quality to his character, a quintessential Aussie bloke. Cast largely against type here, Keenan taps into a nasty and vicious edge as the thuggish and intolerant Dean. Sebbens is also very good as the driven cop. The supporting cast also includes cameos from veterans Chris Haywood (creepy) and Ernie Dingo.

The film takes place in Brisbane, and while cinematographer Geoffrey Hall gives us plenty of overhead shots of the city, he doesn’t really give us a sense of place. He uses the Steadicam a lot, which brings a sense of energy and urgency to the material.

Ultimately Australia Day has a darker vision and is not a crowd pleasing, feel good family friendly film like the two appealing Red Dog dramas from Stenders. While it will do well on the festival circuit it may struggle to find an appreciative audience.

For more of Greg King’s writing on film, check out his blog at  filmreviews.net.au