Aurore is an unobtrusive little charmer of a French comedy. 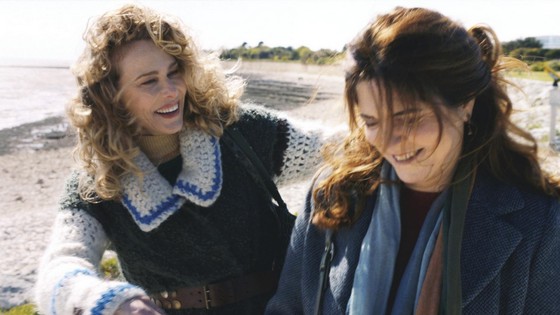 Aurore (Agnes Jaoui) is a middle-aged woman with two adult children. She muddles through life as best she can. She’s a fighter, not a victim, although she experiences discrimination. Then she unexpectedly bumps into an old high school flame, Totoche (Thibault De Montalembert). She hasn’t seen him since her teens … and there’s still undeniable chemistry there. Mind you, he has reservations about turning back the clock.

Writer and director Blandine Lenoir (Zouzou) realised women in their 50s weren’t being adequately represented in cinema. She saw many women around her – those she regarded as incredible, beautiful and talented, whose exes had been able to make new lives for themselves – ending up in terrible loveless solitude. So Lenoir wanted to pay homage to these women and give them – and herself – the desire to grow old.

Agnes Jaoui is delightful in the lead role. She’s effortlessly believable as a woman struggling with hot flushes, andoften dissolving – without notice – into a flood of tears. Her interplay with Lou Roy-Lecollinet as her character’s younger daughter is among several low-key highlights in Aurore.

Overall, quirkiness and surprises give the film a lift. A number of these involve Aurore’s best friend Mano (Pascale Arbillot). He’s a real estate agent with the ability to shock, and regularly uses Aurore to help hasten sales.

I have a soft spot for French comedies, which frequently have a sensibility that you don’t find in American offerings. They have a language all of their own … and here is yet another example. Aurore is a small but welcome crowd pleaser.