At First Light is a minimalist sci-fi movie from Canada. Although it offers a rather disappointing outcome and they could have done more with the powers Alex (Stefanie Scott) has at a certain moment, it’s still worth watching. For the umpteenth time, it’s clear you don’t need a huge budget to make a fascinating film. A limited budget also means there’s no need to expect overwhelming special effects. Apart from moving objects with the help of a certain kind of telekinetic force and a few moving light points, there are not a lot of impressive effects. 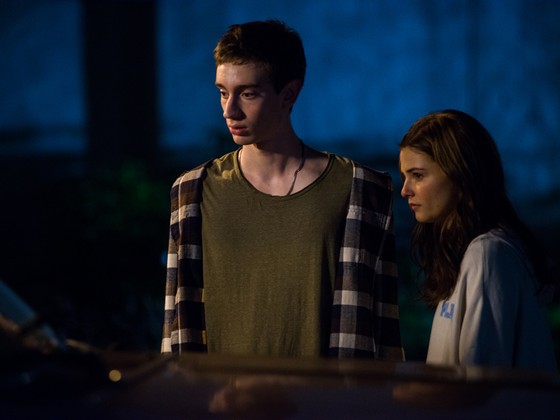 This movie is best described as a mix of Close Encounters of the Third Kind and Chronicle. And this mixed with a bit of teenage romance. Films about earthlings who come into contact with extraterrestrials are nothing new. It’s only recently that you could enjoy  Arrival and A Quiet Place. The first one in which humans try to build a communicative bridge between man and strange aliens with the help of a linguist. In the second film, one avoids the unsightly space creatures and communicates as little as possible. The mutual conversations in At First Light are also as good as absent. Here it’s limited to some floating points of light that dazzle you rather than say something that makes sense.

In most films where there’s such contact, adults handle this. In At First Light the two teenagers Alex and Sean (Théodore Pellerin) are confronted with these science-fiction-like situations. There were more films in the past with kids meeting some kind of Martians. Just look at E.T. and Super 8. The nice thing about At First Light is that it’s not only about a communication problem between humans and extraterrestrials, but also about a recurring love between the two protagonists. It’s quite clear that something went wrong between Alex and Sean in the past. Yet there’s still some affection between both of them. Certainly from Sean’s side. Despite the fact that his presence near Alex has a destructive influence on his physical constitution, he remains on her side.

Perhaps the film is a bit too average when looking at the SF-part. So many will be disappointed. But the story itself is fascinating enough and it feels as if it’ll have a dazzling apotheosis. But this turns out to be absent afterward, unfortunately. Don’t expect a lingering denouement. And there’ll be unanswered questions after the film. That in itself isn’t so dramatic. There are more films like that. Nonetheless, this film still shines in one specific way.

And that’s because of the admirable acting of the three young actors Theodore Pellerin, Percy Hynes White, and Stefanie Scott. In spite of its limitations, this film could be popular with a teen audience. Compared to The Darkest Minds, where teenagers also possess certain supernatural powers and you’ll witness some corny romantic developments, this was certainly way better. Not that there’s something new to discover in it or that it left a breathtaking impression. But At First Light will stay longer with me than the silly stuff from The Darkest Minds. For diehard sci-fi enthusiasts, this film is highly recommended.

At First Light is now available to rent or buy on iTunes.