While watching Apollo 11, I felt immense pride in what Neil Armstrong, Buzz Aldrin, Michael Collins and the entire NASA team managed to achieve 50 years ago – on 20 July 1969. The never-before-seen footage lifts the lid on exactly what happened from the final hours before take-off until the three astronauts returned safely to Earth. 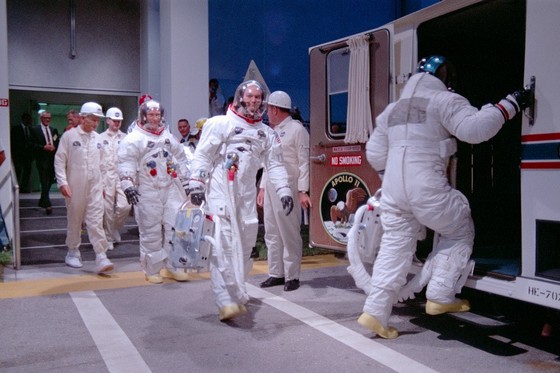 The story is told chronologically, fundamentally through primary source vision and sounds (no narration or cutaway interviews) together with a few easy-to-understand diagrams. Through it all I simply admired the achievement. Looking at the swathe of people in mission control, I admired the professionalism of the operation and felt the tension and excitement. The doco also looks at the minutia, which was so critical to an operation like this – nuts and bolts being tightened at the last minute due to a leak in the rocket that had fortunately been detected. Then there are the moments of sheer adulation – take-off, the first view of Earth from above, the lunar landing, Neil Armstrong’s first steps, splash down and the first sight of the triumphant trio.

Apollo 11 is fascinating, insightful and detailed. Crafted from a newly discovered treasure trove of footage and audio recordings,  it takes the audience to the heart of NASA’s most celebrated mission. Director Todd Miller and his team worked closely with NASA and the US National Archives (NARA) to locate all existing Apollo 11 footage when NARA staff members made a startling discovery that changed the course of the project. It was an unprocessed collection of 65mm large format footage containing stunning shots of the launch, the inside of mission control and recovery and post-mission activities.

My only little gripes concerned the short shrift given to personal photos of the astronauts and their families early in the piece. They were only on screen for seconds, when I believe far more air time was warranted. And then there was the minute font size used when identifying NASA personnel and activities. Diminutive type was also used when counting down the time on screen to pivotal moments. Why wouldn’t you make these more legible?

Still as a gripping piece of history, Apollo 11 certainly claimed my attention and held it throughout.