Talk about a force of nature taking to a stage and theatrical space and making it her own. Meow Meow does so and how! She is a consummate performer with a golden voice and a smart mouth.

First up a couple of musos run across the stage in shiny gold jackets and bright orange plastic fluoro workers’ hats, carrying helium filled balloons in the shape of letters “H” and “A”. They take their places behind a piano and drums. Some way into the show another talented musician, carrying the letter “P”, joins them on double bass. In fact, the trio excels on a wide range of instruments during the 90-minute piece without interval.

Meow Meow makes a grand entrance via the walkway four rows from the stage, which is “dressed” to look like a rundown construction site – a faux log fire in the foreground. She is dressed in a gold number, which has a huge split to the thighs showing off some seriously good legs (which she references later in the show). In front of her dress is a fake pregnant belly. In her hair is a tiara that looks like a crown. She is carrying a helium filled balloon in the shape of a “Y”. If you haven’t worked it out by now, the letters all but spell out “Happy”. Meow Meow is holding not one but two cigarettes and a plastic blow up animal sporting a frill around its neck. All of this makes for quite a sight!

She greets and interacts with the audience with a great deal of enthusiasm and plenty of front and cheek, immediately winning us over. She complains that the venue is not Royal Albert Hall, Sydney Opera House or the Melbourne Recital Centre, rather but a shelf or a ledge. This is Meow Meow’s unique tribute to Christmas. She tells us she will be singing festive season ditties, starting with one from Spain. Let’s just say her choice of subject matter (suicide and the apocalypse amongst them) more often than not isn’t very cheery, although her vocalisation and harmonising are spot on. She has a powerful and melodic voice. The music is a combination of original songs and material from the likes of Radiohead, Julie London, Patty Griffin, Nick Cave, Rodgers and Hammerstein, Chopin and many others.

A couple of retail mannequins and blow up sex dolls in uniform are also part of her shtick. Meow Meow pulls a white plastic blow up toy sheep from between her legs (this isn’t the only time her legs are splayed). She proceeds to add air to it from her pursed lips, before giving up and passing it to an audience member to undertake the job. Such byplay continues throughout the show as she walks on and off stage and literally in front of patrons sitting in their seats. Hilarious stuff.

Meow Meow is nothing if not flexible (in more ways than one) and highly creative. At one point, she does the splits. She tells us she wanted to be a ballerina and there is a ballet sequence in this production, in which she dances in a tutu and pointe shoes with a large projection of a ballet dancer in full flight behind her. Instead, she says she has had to settle for being “a show girl of gargantuan proportions”. 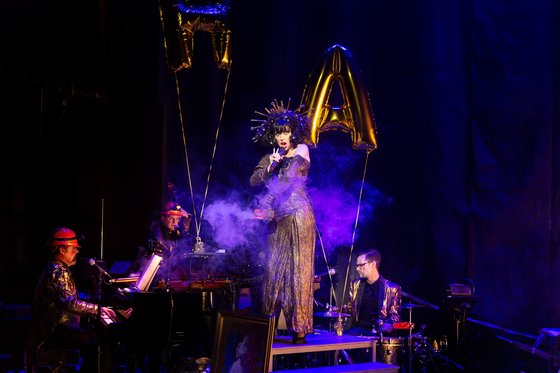 Meow Meow gets mighty excited handing out Christmas presents and swigs booze from a bottle. She makes light of abusing medication (“What day is it? I think I’m a week ahead.”) from a see-through plastic seven-day dispenser, generating peels of laughter. In a dream sequence she is joined on stage by her “double” (Michaela Burger), who reappears at the end of the show with a vacuum cleaner in hand. Before this is over, Meow Meow et al will have us in stitches with a unique rendition of Silent Night, during which she constructs a less than elegant Christmas tree out of a large ladder.

Rest assured, this crowd-surfing, tragi-comedienne with golden pipes continues to wow audiences with her organised mayhem and hijinks. Just brilliant! Directed by Michael Kantor, with musical direction from Jethro Woodward, Apocalypse Meow: Crisis is Born is playing at Merlyn Theatre at Malthouse Theatre until 1st December, 2019.