Annabelle Comes Home is the third film featuring the sinister doll from the Conjuring universe. Gary Dauberman, the screenwriter of the Annabelle films, makes his directorial debut. 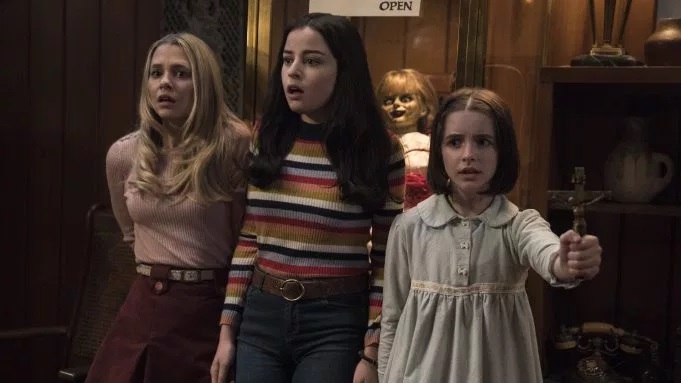 Determined to keep Annabelle from wreaking more havoc, demonologists Ed and Lorraine Warren (Patrick Wilson and Vera Farmiga) drive the possessed doll to the locked artifacts room in their home. They place her “safely” behind sacred glass and enlist a priest’s blessing. But a year later, an unholy night of horror awaits the Warrens’ ten-year-old daughter, Judy (Mckenna Grace), and her friends after a visit to the room awakens Annabelle … and all the evil spirits living there.

The Warrens go away for a night, as they often did for work, leaving Judy at home with her babysitter, Mary Ellen (Madison Iseman). Mary Ellen’s friend Daniela (Katie Sarife) arrives at the house unannounced. Her inquisitive nature and a deeply personal interest in what the Warrens do is what sets off a chain of events that threatens the girls’ well-being and that of a neighbour who has a romantic interest in Mary Ellen.

Annabelle Comes Home takes a while to get going this time around and keeps a rather languid pace throughout. On the plus side, there are a few genuinely scary moments. I didn’t mind the concept involving the babysitter. However, while I felt it showed promise, in the end I am afraid it didn’t lead anywhere. The storytelling ended up being flat.

And that’s despite the filmmakers using all the hallmarks of the franchise. I was certainly not uncomfortable with the premise, nor the soundtrack or sound effects, which served the purpose well. So, in the end my disappointment rested with the pacing and scripting.