If you’re into the Yuletide spirit, perhaps a British teenage zombie musical should be an early Christmas present. Yep, when you’ve seen Anna and the Apocalypse, you’ve seen it all; although perhaps you have better things to do. 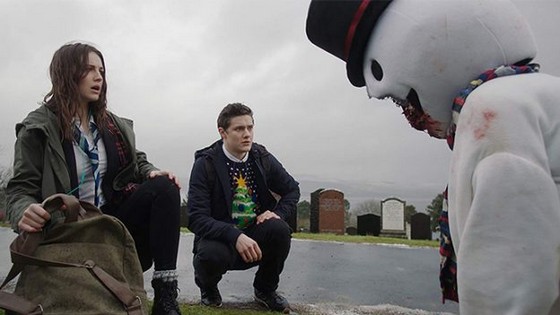 Director John McPhail based Anna and the Apocalypse on his BAFTA-winning short Zombie Musical. The late Ryan McHenry, who earned viral fame from his “Ryan Gosling Won’t Eat His Cereal” videos co-wrote the script.

It’s the day before Christmas in the sleepy Scottish town of Little Haven. Tony (Mark Benton) is driving his daughter Anna’s (Ella Hunt) and her best friend John (Malcolm Cumming) to school. Anna drops the bombshell that she doesn’t intend going to university, but rather wants to take a year off to travel. Tony, who also happens to be the school janitor, is none to happy. Anna brushes off his misgivings, but soon she and John will have a great deal more to worry about. That’s when it becomes clear that an undead horde has descended on their town and they’ll be lucky to escape with their lives.

I must admit this film starts with promise. It’s funny and silly and I was wondering exactly where it was heading. Just a few signs of zombies appear in the first half hour or so, before the full catastrophe rolls out. When the lead actor first breaks out into song, I thought it a little weird. Why, I was asking myself? But before it’s over there’s a whole lot more of the high school musical stuff. And to be fair, it seemed rather unnatural every time.

There have been some decent zombie movies over the last few years – including Shaun of the Dead, 28 Days Later and Warm Bodies. I am afraid this though isn’t one of them. For one thing, it didn’t go anywhere. The plot was extremely thin and I reckon it just went round in circles. It felt like the filmmakers had an idea to incorporate zombies, music and Christmas and that’s about as far as they got.

By half an hour in, Anna and the Apocalypse had waved the white flag. After that it was purely playing the numbers. It lacked inspiration.