Angel of Mine is a slow-moving thriller about  intuition and obsession. Inspired by real events, it follows divorced mother Lizzie Manning (Noomi Rapace). She’s emotionally fraught, as she battles for custody of her son and juggles a job as a sales rep for a cosmetics line. 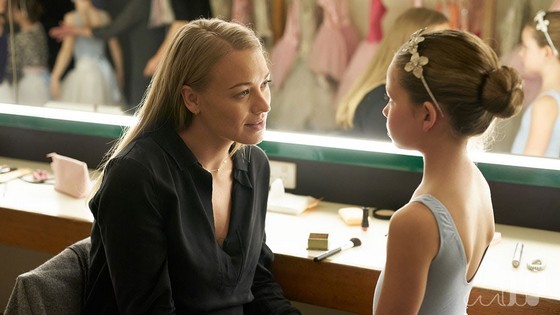 An encounter with Lola (Annika Whiteley) turns Lizzie’s life upside down. Lizzie becomes convinced the young girl is the daughter she lost seven years ago in a hospital fire. Unable to let go of that thought, Lizzie befriends Lola’s mother Claire Bradley (Yvonne Strahovski), inching her way into Lola’s life. Lizzie becomes a stalker and her behaviour increasingly disturbing. She’s driven by inconsolable pain and the primal urge to mother. Inevitably, confrontation follows.

Written by Luke Davies and David Regal, Angel of Mine is a reworking of a 2008 French movie called Mark of an Angel. Direction is from Kim Farrant. I wanted to like it a lot more than I did. I willed it to be better than it turned out to be. More is the pity. With plot holes and credibility issues, save for a late twist (which I dare say you can half see coming), I found Angel of Mine frustrating.

Angel of Mine suffers because it uses the tropes of the genre to give us what we expect. More surprises were needed, so that gets back to the inadequacy of the script.

While Noomi Rapace does much of the heavy lifting, her taciturn, moody character isn’t particularly likeable. I thought Richard Roxburgh’s character (Lola’s father) was weak and thinly drawn.

For a supposed psychological thriller, Angel of Mine is strangely flat.