It was bound to end badly, but what a rollicking ride. Tom Cruise (Top Gun) reunites with his Edge of Tomorrow director, Doug Liman, in the international escapade American Made. The film is based on the outrageous (and real) exploits of a hustler and pilot unexpectedly recruited by the CIA to run one of the biggest covert operations in U.S. history.

With his devilish swagger and zest for life, TWA pilot Barry Seal (Cruise) is lauded in his sleepy southern town. Much to the surprise of his wife, Lucy (Sarah Wright Olsen), the charming entrepreneur has gone from a well-respected TWA pilot to a key figure in one of the greatest scandals in modern history. What started out as transporting contraband led to Barry’s help in building an army and funding a war. 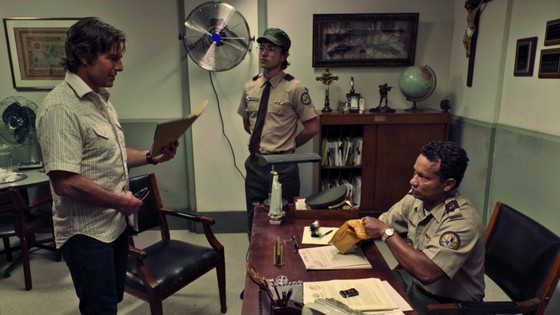 Once the hotshot airman gets caught up in a shadowy division of the government – running crates of AK-47s and kilos of cocaine – he makes a fortune as a key player in the Iran-Contra affair. From trading arms for hostages to training forces of Central and South American kingpins, Barry becomes an improbable hero working against the system. So, how does he sleep at night? As his contact tells him, “it’s all legal if you do it for the good guys.”

The politics of the piece may be difficult to grasp, but that doesn’t matter in the hands of such adroit filmmakers. This is one wild adventure, and it’s perfectly suited to Cruise. He clearly loves making these kinds of movies. American Made is a film that sizzles from the get-go and doesn’t let up.

Highly entertaining and amusing, the film channels imminent danger throughout. It doesn’t miss a beat. There’s action aplenty in the skies and on the ground, interspersed with representations of Seal’s personal life. He is painted as a dutiful husband and father.

You can only imagine that scriptwriter Gary Spinelli (Stash House) may have taken some poetic license in so doing, because Cruise is charm personified. I also appreciated the laconic representation of the guy who lures Seal into his new lifestyle.

American Made is a great piece of work, which arguably paints the insidious drug trade and those who become wealthy beyond comprehension because of it in too nice a light. But then, that is its want – stylish and irreverent. Rated MA, it scores an 8½ out of 10.