How not to plan and execute a heist. Four totally clueless amateurs get involved in something they should never have attempted in American Animals. Frighteningly, it’s based on relatively recent reality. 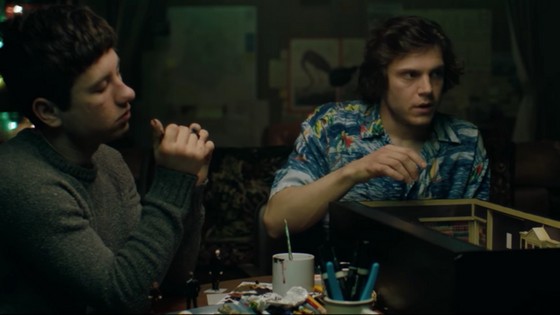 The story centres around unpredictable wild child Warren (Evan Peters) and aspiring artist Spencer (Barry Keoghan), two friends from the middle-class suburbs of Lexington, Kentucky. They’re worried their lives aren’t going anywhere special, so on a mere suggestion from Spencer, Warren begins organising the brazen theft of some valuable books. Those tomes are in the special collections library of Spencer’s college. They include Audubon’s Birds of America, which – alone – is valued at US$10 million.

Along the way, the prospective raiders feel the need to enlist a couple of others – a budding accountant, Eric (Jared Abrahamson) and a fitness fanatic, Chas (Barry Jenner). They plot (not very convincingly), they put on their game faces and they strike the library.

The director is British-born Bart Layton, whose documentary The Imposter won a BAFTA for Outstanding Debut in 2013. That was the story of a French conman who passed himself off as a missing Texas teenager. Now Layton switches to a fictional narrative based on the true story of a botched robbery in a Kentucky university town in 2004.

Layton has, indeed, cleverly interwoven interview snippets of the real-life quartet into the story as the drama unfolds. So much so that on occasions the actors complete the lines which begin to be delivered by the actual four and it works seamlessly. Being novice criminals, they planned the crime by watching movies like Oceans 11 and Snatch and Googling how to orchestrate the perfect heist. The more they plotted, the more addictive it became.

More than anything I sat there thinking “this can’t possibly be happening”. As the robbery draws ever closer and in particular as it goes down the tension is palpable.

The actors do a decent job filling their respective roles, with a primary focus on Spencer and Warren. The production values in the film are strong. Still, the material felt stretched. Nevertheless, I was intrigued and surprised. Layton is clearly a most accomplished story-teller and filmmaker.