The late, great Aretha Franklin was affectionately known as “the Queen of Soul”. She was one of the biggest selling female artists an topped the charts with a string of number one hits like “Respect”, “Think”, and “Spanish Harlem”. 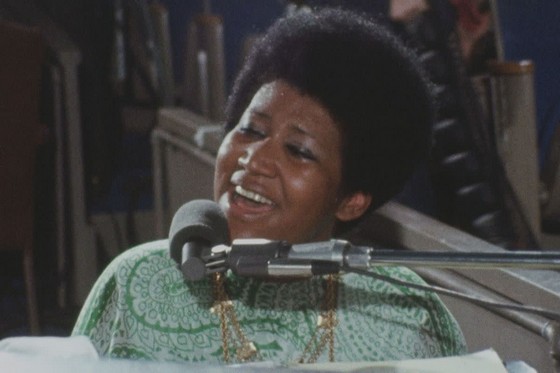 But in 1972 she took the radical step of returning to her roots and recorded an album of gospel songs. The daughter of a Baptist minister, Franklin had sung those songs in her father’s church while young. She wanted to record the album as a live record and set out to record it over two nights at LA’s New Temple Missionary Baptist Church to lend authenticity to the experience. However, her record company was not exactly enamoured by the project believing it to be a commercial failure. As it turned out, the Amazing Grace album went on to become the best-selling gospel album of all time.

Musical producer Jerry Wexler had organised for film director Sydney Pollack to oversee a documentary capturing the event. Pollack had achieved early success as a director of television drama and had a couple of feature films like the western Jeremiah Johnson and the drama They Shoot Horses Don’t They? under his belt. Something of a novice when it came to live music and film Pollack failed to use clapperboards and synch the audio and the visuals during the recording sessions. Consequently, the film was shelved for four decades. Franklin herself apparently didn’t want the film released and took legal action against the producers.

Eventually Pollack ceded control of the film to producer Alan Elliott, who oversaw the process of editing some 20 hours of footage into this 90-minute documentary and time capsule of that legendary performance. He has also employed modern digital technology to correctly match the sound and vision, allowing Amazing Grace to hit cinema screens. There are no interviews to give context to the performance; rather it is left to Franklin’s amazing voice to speak for itself.

Franklin gives her all with the moving renditions of the songs, and her sublime voice and great vocal range is beautifully accompanied and complemented by the Southern California Community Choir under the energetic direction of Alexander Hamilton. The charismatic reverend James Cleveland acts as master of ceremonies and is also something of a scene stealer and camera hog.

Franklin’s father appears briefly to deliver a moving speech to the rapt audience as he addresses her childhood and how that shaped her. Visible in the audience is Rolling Stones’ front man Mick Jagger, who seems to be getting into the mood, while fellow bandmember Charlie Watts looks a little bored. Eagle eyed viewers will also spot musicians Billy Preston and Joe Walsh in the audience.

But in the end Amazing Grace is just like most other filmed concert movies, and its enjoyment will depend on how much of a fan you are.