Set during the last great Ice Age in Europe some 20,000 years ago, Alpha is an epic adventure. This brutal tale of survival in a harsh wilderness is a bit like a prehistoric version of The Revenant. It’s also something of a coming of age tale as it follows a teen’s journey to manhood. There is also something of Jack London’s classic The Call of the Wild about its subplot in which the boy tames a wolf and turns him into a pet, forging that “first bond between man and canine”. 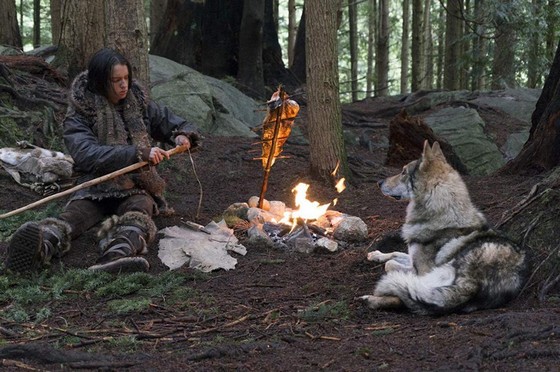 Every year the primitive tribe hunts for bison, for food and for the skin to turn into warm clothing and other items necessary for their survival. This year Keda (played by Australian actor Kodi Smit-McPhee), the sensitive teenaged son of the tribal chief, is permitted to join the hunt. But he proves less than adept at some of the necessary skills, such as starting a fire with wooden sticks, and he also fails to cut a wild boar’s throat, clearly disappointing his father Tau (Icelandic actor Johannes Haukur Johannesson, from Atomic Blonde). Then during the hunt itself, Keda is attacked by a bison, thrown over a cliff and left for dead.

When the bloodied and battered Keda recovers he is suffering a broken leg and other injuries. But he slowly and painstakingly begins the long and arduous journey home across a sparse and unforgiving landscape, using some of the skills taught by his father, such as navigating by the stars. At one stage the weakened boy is attacked by a pack of wolves. He manages to beat them off, injuring one of the wolves in the process. He helps heal the wolf’s injuries and the wounded and lost pair form a strong bond. The wolf becomes Keda’s companion on the long journey, protecting him from threats and helping him hunt for food.

Alpha marks the first solo directing outing of Albert Hughes, better known for working with his brother Allen on gritty and hard-hitting action dramas like The Book of Eli and From Hell. With his rugged direction, he gives the material an almost mythic quality. And despite some gritty and bleak moments, this is also easily the most family-friendly film of his career.

As with The Cave of the Clan Bear (1986) and Quest for Fire (1981), Hughes and first-time screenwriter Daniele Sebastian Weidenhaupt have created their own language here, which helps steep the audience in this unfamiliar environment. The film also captures the harshness of nature and its dangers. Some great CGI effects recreate this prehistoric setting, with woolly mammoths and sabre-toothed tigers in the background.

Since his AFI award-winning role opposite Eric Bana in Romulus, My Father, young Smit-McPhee has established a solid career in Hollywood with films like Let Me In, the apocalyptic The Road with Viggo Mortensen, and appearing as Nightcrawler in the X-Men franchise. This is one of his more challenging and physical roles, as he is on screen the whole time, and has to convey a range of emotions and convey Keda’s inner turmoil. He brings a mix of vulnerability, naivety and ultimately strength and determination to the role as he matures. The bond that develops between boy and dog is well developed and credible and gives the film its emotional heart.

Alpha was filmed on location in Canada and Iceland, and the harsh wilderness locations and snow-covered vistas add a sense of realism to the drama. The film has been gorgeously shot by Austrian cinematographer Martin Gschlacht (Goodnight Mommy) whose sweeping visuals and widescreen lensing capture some spectacular imagery, and the stark beauty of the landscape demands to be seen on the big screen. The bison hunt itself lacks the grandeur of Kevin Costner’s Western epic Dances With Wolves though. The visuals are accompanied by an atmospheric score from Michael Sterns and Joseph S DeBeasi.

Alpha is not without its controversy though as animal activist groups are outraged that the producers apparently killed four bison during filming.