In 1613 William Shakespeare (played in All is True by Kenneth Branagh) was the most famous writer in England. But then his beloved Globe Theatre burned to the ground during a performance of his final play Henry VIII after a prop misfired. Shakespeare retired following that disaster and returned home to Stratford-upon-Avon. There he pottered around the house and tried his hand at gardening, but found that life away from theatre was pretty dull and unfulfilling.

And he tried to mend his damaged relationship with his family, in particular his long-suffering wife Anne Hathaway (Judi Dench) who was displeased with him. During his long absences in London where he was establishing his reputation, Anne had basically raised the family by herself. His two daughters Susannah (Lydia Wilson) and Judith (Kathryn Wilder) were also not that happy with him. Shakespeare himself was still haunted by the death of his son Hamnet, twin brother of Judith, who had died many years earlier. 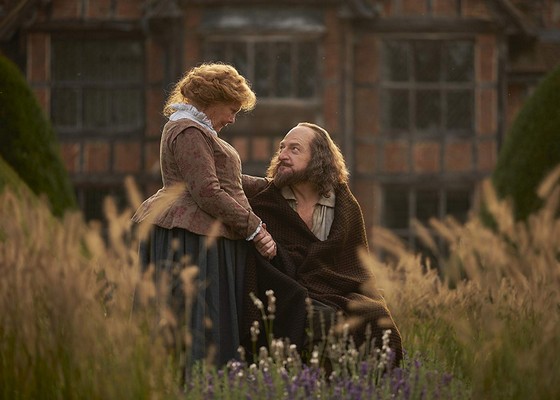 Not much is known about the last years of Shakespeare’s life – he died in 1616 – but this drama tries to imagine what life was like for the self-obsessed bard during his retirement. “I never let the truth get in the way of a good story,” Shakespeare says at one point in the film, and that typifies the approach to the material taken by writer Ben Elton and director Kenneth Branagh, who is best known for his efforts in bringing Shakespeare’s works to the stage and screen. Elton is responsible for the Shakespearan sitcom Upstart Crow. The pair have taken some liberties with Shakespeare’s life, even drawing upon events in his plays to try and shape the psychological aspects of the character.

All Is True is something of a labour of love for Branagh, a long-time fan of the bard who has helmed several film adaptations of his plays. Although All Is True is looking at a famous writer, the film is not so much about the writing process as it is in offering up a portrait of the bard as a flawed man full of regrets and obsessed with tragic events of the past. Shakespeare is depicted as flawed and very human rather than a revered genius. Anyone expecting a jolly period romp along the lines of the Oscar winning Shakespeare In Love will be sorely disappointed. Elton’s uneven script lacks the wit and humour and vitality that Branagh has brought to his own adaptations of Shakespeare’s celebrated works. The themes of grief and obsession lend the material a melancholy feel.

All Is True delves into the complex nature of the relationship between Shakespeare and his long-suffering wife and the simmering tensions within the household. Anne was basically illiterate, but she is sharp tongued and given plenty of voice here. Dench, herself a theatre veteran intimately familiar with the works of Shakespeare, delivers a commanding performance here. Branagh himself resembles Shakespeare thanks largely to some prosthetic makeup and a fake beard. But despite being a renowned writer here he is a man of few words and something of a dullard. There is a nice cameo from Ian McKellen, himself a respected Shakespearian thespian, who plays the flamboyant Earl of Southampton, the playwright’s patron and believed to be the inspiration behind some of his romantic sonnets.

Branagh’s direction also lacks energy. Many of the scenes that take place inside Shakespeare’s house have been shot by cinematographer Zac Nicholson (The Guernsey Literary And Potato Peel Society) using candlelight, which renders them dark and gloomy, and you almost have to strain your eyes to discern what is happening at times. The exterior scenes are shot in a warmer palette however. Michael O’Connor’s costume design lends authenticity to the period detail.

All Is True will appeal mainly to those who are familiar with the famous playwright and will get some pleasure out of Elton and Branagh’s approach to his twilight years and the script which is liberally punctuated with allusions to his work. For the more casual filmgoer it will be a curiosity to pass the time.