Disney’s Aladdin is simply a mind-blowing visual experience that had the audience in ecstasies that resembled an old time US revival meeting as they screamed, cheered, and gasped in adoration. With American accents it was Disney all the way with feel, audience pitch, values and quality.

For me, after an adult life time involved in the entertainment industry I thought I had seen everything, but then I attended the opening night. There in QPAC’s Lyric Theatre, I saw things I have never seen before. 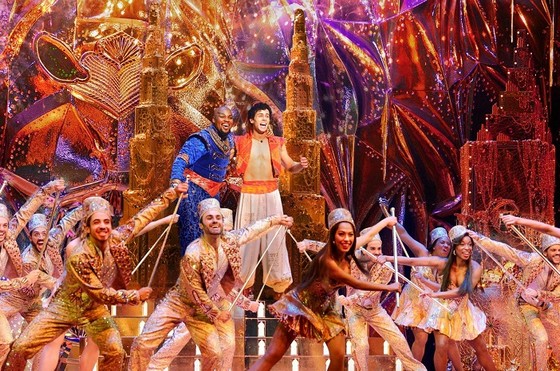 Never I have I seen a standing ovation for a dance number before interval and never have I seen a carpet fly through the air the way Aladdin’s carpet did. It was all part of the visual magic that is this vibrant production. Disney fans will love this faithful copy of the 1992 movie with its familiar characters and songs (plus a few new ones to help the plot along). The script is slight and follows pretty well the basic Aladdin tale – small time thief (Ainsley Melham) who loves the princess (Hiba Helchikhe), finds a magic lamp with a genie who grants him three wishes; becomes a prince but eventually wins the princess by just being himself. His nemesis is the evil Jafar (Adam Murphy) and his bouncy sidekick Iagio (Aljin Abella).

The characters are given no room to move with the script. But it doesn’t matter, with the glitz, glamour and amazing visual effects, the show is a solid gold hit. The visuals remain in the brain for a long time afterwards, from the silhouetted towns to the incredible interior of the cave and the magic of the flying carpet.

It is set for a long run in Brisbane.

Gareth Jacobs as the genie came out best of the characters, with his high camp delivery and comic timing. Early on Aladdin and his cohorts tended to talk too fast and a lot of dialogue was lost and it took quite while for them to settle down. 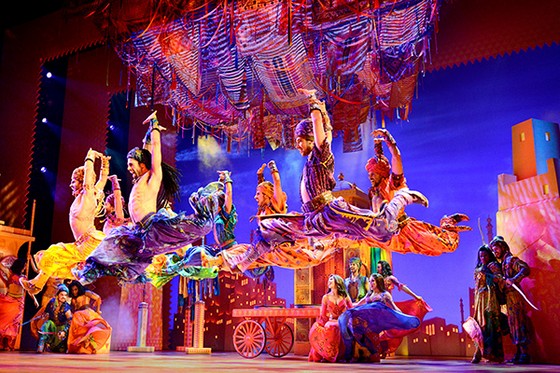 On top of the effects the costuming is stunning and the dance routines at times incredible – hence the standing ovation.

This was for “Friends Like Me” with the Genie, Aladdin and the so-talented and glamorous ensemble. The number was a sure fire show-stopper, it just rocked with energy, terrific choreography, and amazing dancing. It was no wonder the audience leapt to its feet at the end.

The emotions stayed right until the end when once again the audience stood and raised the roof with wild applause. It was a big night out.