“I had the greatest time!” said one young patron after seeing Age of Stephen. Hear, hear. What an entertainer. What a sense of comic timing. What a romp – a jam-packed, fun-filled hour of entertainment with big audience appeal as Stephen Valeri’s soaring vocals channel John Farnham. 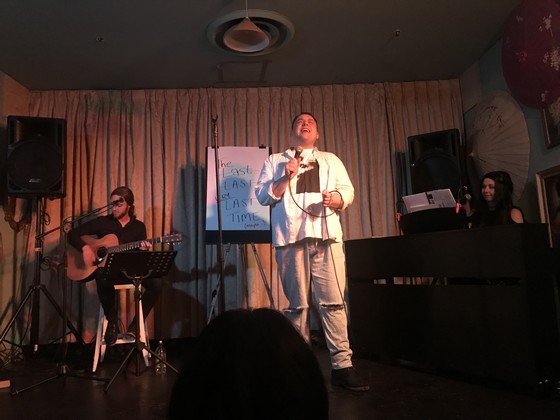 A large easel sits on the stage before Valeri enters. It reads: “The last, last, very last time (maybe …)”. Of course, that’s a reference to the fact that Farnsey has had more comebacks than Dame Nellie Melba.

Dressed in a t-shirt emblazoned with a Farnham image, and sporting a blonde wig, Valeri makes his appearance. Caleb Garfinkel (who Valeri indicates represents Farnham vocalist and musician Lindsay Field) plays guitar and Kellie-Anne Kimber (a version of Lisa Edwards) is on piano. Both also provide backing vocals.

Valeri then belts out “Two Strong Hearts” and “Pressure Down”, before literally flipping his wig. He confesses he’s not actually John Farnham, only an eager devotee. But he’s no regular Farnham fan – he shares a spiritual connection with the 69-year-old. Just how strong that connection becomes a lot clearer after he goes back in time to resurrect “Sadie, the Cleaning Lady” (Farnham’s first hit), followed by “Raindrops Keep Fallin’ On My Head” and “One”; all from the late ‘60s.

Valeri turns to the easel and proceeds to list what he and “The Voice” have in common, punctuated by more singing. Throughout the performance, he talks about Farnsey with reverence and joy.

We’re encouraged to sing along. At one point four audience members are called up in front of the stage to reenact “Human Nature” and the song “Every Time You Cry”. That works a treat. Then a deliberate lull in proceedings for dramatic effect. Suddenly, Valeri is tinkling the ivories, serenading us with “Help”, before finishing with “You’re The Voice” (complete with a very clever and funny stand-in for the bagpipes). 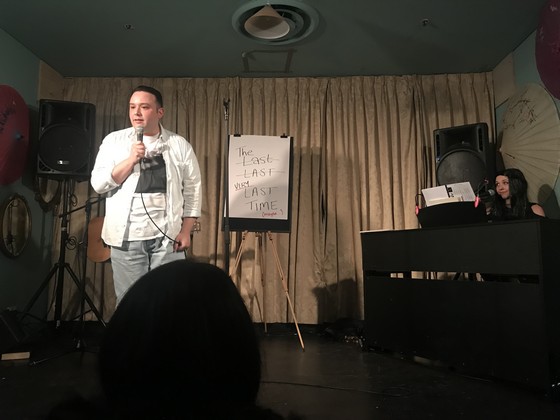 A surprise double ending to the show follows. One involves the ingenious use of penmanship (to say any more would be to spoil the surprise). The other, on opening night, was the appearance in the audience of the actual vocalist extraordinaire Lisa Edwards (a constant member of Farnham’s band since 1988). She all but left Valeri speechless. It provided a very special moment for him … and for us.

Age of Stephen is a superbly conceived and executed show and Stephen Valeri is one heck of a talent. He isn’t Farnsey – he’s his own man! It’s playing at The Butterfly Club until 23 September 2018. Don’t miss it.