After is a film that knows its audience and delivers to it.

Tessa Young (Josephine Langford) is a dedicated student and dutiful daughter to her single mother Carol (Selma Blair). She’s a loyal girlfriend to her high school sweetheart Noah (Dylan Arnold). When Noah and Carol drop off Tessa for her first year of college, her course is clear: get good grades to find a successful career and live happily ever after. But her roommate Steph (Khadijha Red Thunder) has other ideas. She encourages Tessa to experience the social side of college by introducing her to her wild group of friends, including Hardin Scott (Hero Fiennes Tiffin). 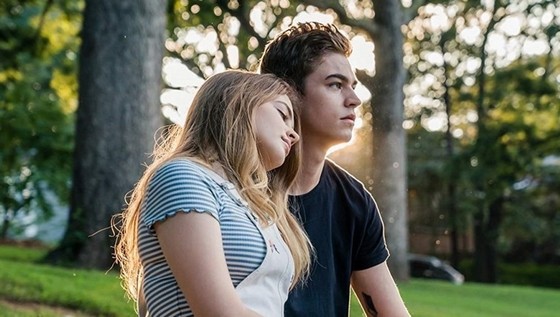 British import Hardin is smart and mysterious. He disarms Tessa with his charms. When a truth-or-dare game at a party has Tessa poised to make out with Hardin, she declines to play – a rejection Hardin hasn’t experienced before. Tessa and Hardin go on to spar over literature in their shared English class.

Tessa’s learns from a new friend Landon (Shane Paul McGhie) that Hardin the son of the college’s Chancellor (Peter Gallagher). She’s surprised the rebellious Hardin would be related to such a respected campus figure. When Landon indicates that Hardin is a complicated character and may not be exactly who he seems, Tessa decides not to play into Hardin’s games. But when Hardin invites Tessa to visit his “secret place”, he shows her a vulnerability that ignites a desire in her.

Jenny Gage directs from a script written by Gage, Susan McMartin, Tamar Chestna and Tom Betterton. It in turn is based on a novel by Anna Todd. Todd’s best-seller became a publishing sensation after starting as fan fiction on the social storytelling platform Wattpad. It was posted one chapter at a time, almost daily, with fans weighing in on what Todd was creating.

The film however is nothing here we haven’t seen before. It follows a well-worn formula; though with one big surprise. I dare say those who have swooned over the novel will flock to the cinemas to see it.

While I quite enjoyed the performance of Langford as the lead, Hero Fiennes Tiffin doesn’t exactly set the world on fire as the pouting recalcitrant.