Adoration for ABBA in Australia shows no signs of abating if the crowd at The ABBA Show at the Athenaeum Theatre in Melbourne is anything to go by. The audience (of a certain age) turned back the clock as they danced, swung their arms in the air and frequently cat-called “Ya” as a group of two Brits and two Aussies played most of the ABBA favourites.

The ABBA Show has come to town with a two-hour showcase of the hit songs that saw ABBA claim the 1974 Eurovision Song Contest and go on to superstardom. It’s racked up more than 5,000 international concerts. 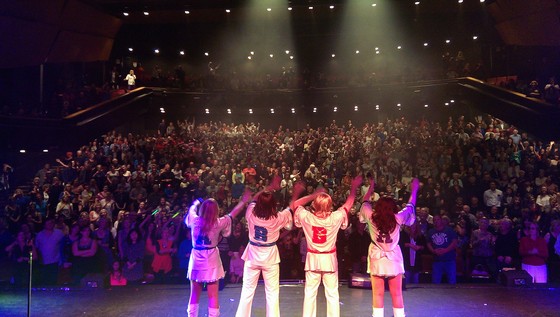 The discography of the Swedish pop group consists of eight studio albums, two live albums, seven compilation albums and 73 singles; so there was obviously a surfeit of material to choose from. About 20 songs make the cut, including “Chiquitita”, “Knowing Me Knowing You”, “Money Money Money”, “Dancing Queen”, “Honey Honey” and “Rock Me” in the first act.

The second kicks off with “Super Trooper” and “Fernando”, before bringing it home with “Gimme! Gimme! Gimme!”, “I Do I Do I Do”, “Mama Mia”, “Ring Ring”, “Thank You For the Music” and “Waterloo”.

The four performers who are fronted by two British women – Hannah Pocock as Agnetha and Jenna Ball as Frida (with several outfit changes replicating those worn back in the day) – and Aussies Cameron Charters as Björn and Brent McMullen as Benny, on keyboard and guitar.

They have a strong three-piece backing band – bass guitarist, saxophonist and drummer. Behind them is a video screen, frequently populated with different colourful representations of the four letters that have become ubiquitous – A-B-B-A.

I enjoyed the second act more than the first. While the voices were powerful, I felt some were stronger and more rounded than others.

I couldn’t see a free seat in the house the night I went along. The excitement in the room, even before the opening note was struck, was palpable. The music seemed to all but drown out the vocals at the start of the first number, but after that, there were no issues.

The girls’ carefully choreographed steps at times appeared just that – carefully choreographed, rather than free flowing. There’s quite a deal of audience involvement, as the band encourages those attending to get to their feet. At one stage Agnetha and Frida even get down among the audience, and one good sport is cajoled onto stage, given a silly plastic hat and a feather boa.

So, the mood is fabulous throughout; which is, to quote an ABBA number, the name of the game. Still, I felt there was an amateurish element to the whole show and the mock playfulness and put-on accents.

That was less apparent after interval. Perhaps by then I had gotten used to it or was just too caught up in the brilliance of the sugary sweet pop vocals. And make no mistake, I’m an unashamed ABBA fan. I have even visited and spent several enjoyable hours in ABBA The Museum, which opened in Stockholm in May 2013.

The ABBA Show, then, is fun but flawed. This quartet is not a patch on the original, but that didn’t seem to worry the hoards that packed the Athenaeum, who couldn’t get enough of the recreations. You have until 30 December 2017 to see them.