The ability to write, direct and act in your own play is no mean feat. Especially when it’s a world premiere! So, accolades to Megan Wilding for her creative, humorous and sometimes confronting storytelling in A Little Piece of Ash. It’s only when those closest to us are gone do we begin a new appreciation of them. And that’s the main message I took from this play which deals with the range of emotions bereaved family members face. 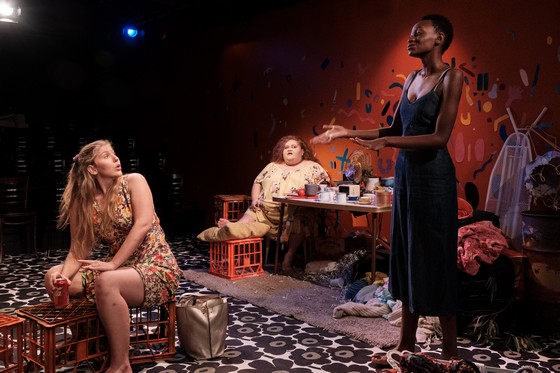 The character of Jedda (Stephanie Somerville) is a young indigenous woman immersed in university and open to different experiences that life offers. She is vibrant, makes friends easily and is good natured. Her mother Lily has just departed, having been stricken with cancer. The news of Lily’s death came suddenly. The play then examines how Jedda reacts in the immediate aftermath. Her well-intentioned friend Mendy (Moreblessing Maturure) attempts to console her by explaining the five stages of grief: denial, anger, bargaining, depression and acceptance. This advice comes too soon and by the end of their exchange, Jedda is already at anger stage.

Another friend Chuck (Luke Fewster) tries a different consolation approach: a night of cheap wine and frivolous conversation. He ridicules death and tries to keep things light-hearted, however his lack of empathy and too much alcohol will leave Jedda still feeling empty. At the funeral, Jedda meets an old friend named Ned (Alex Malone). She uses a spiritual angle to try and help Jedda. Unable to recall the names of everyone at the funeral, Jedda advises Ned to “call the men Uncle and the women Aunty”. This practice needs to catch on!

After a party, Jedda befriends Eddie (Toby Blome) who offers to drive her home. Thinking she can achieve some solace from grief by seducing Eddie, she torments his innocence and naivety by sending mixed sexual signals. As Jedda dares Eddie to expose his secrets, he admits as a Jew, to “having once eaten bacon”. A further sexual admission he makes I found to be objectionable and unnecessary to the plot, although it does give the writer ‘shock’ value I suppose. Poor Eddie leaves dissatisfied, and his dignity destroyed.

The one constant through the whole play is the afterlife spirit of Lily (Megan Wilding). She sits at one end of the stage with typical kitchen utensils around her, enjoying her cups of tea. Jedda can’t see or hear her, but there is a connection via the ‘Dreaming’. Lily talks to the audience like an old friend and listens to Jedda’s conversations, interspersing with unheard words of advice, like we hope any good spirit would do. No longer in pain, Lily laments how Jedda (affectionately called ‘Bub’ or ‘Little Wee Wee’) smokes to such an extent that her “mouth is an ashtray”. She also learns that a sentimental gift of thongs she had received from Jedda were stolen. Oh, let’s hope deceased parents don’t know all our secrets! 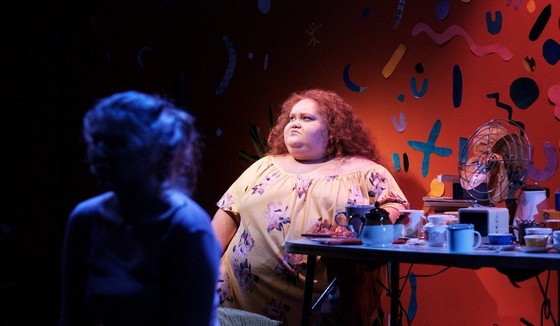 The production is energetic, with interesting, well-played characters and a tight script. Each set change involves dancing laced with a variety of music such as Patsy Cline and Foreigner. It was easy to focus for the 90-minute duration. Each new set began with Jedda’s mobile ringing and going to voicemail; perhaps a reminder of Jedda’s feeling of guilt in not always being there for her mother.

After her death, Lily is cremated. She gives the audience a short lesson in how to experience the ‘Dreaming’. As it turns out, being able to connect with the Dreaming could be an excellent therapy for grief, loss and sorrow. Western culture has a lot to learn!

Jackrabbit Theatre’s production of A Little Piece of Ash is playing at Kings Cross Theatre, Sydney until 26 April 2019.