The shake&stir team has created magic yet again. I have been reviewing the company for the past ten years and amazingly each of their show seemed better than the previous one. A Christmas Carol was no exception.

And what exactly is the magic they make? For me it’s the creation of a perfect atmosphere for the piece: a team effort with the blending of top talent all cleverly coached by director Michael Futcher. This fine adaptation of Charles Dickens’ immortal tale is dark and moody, scary and funny and filled with dozens of characters all played by the seven actors and with the marvellous music of Salliana Campbell. 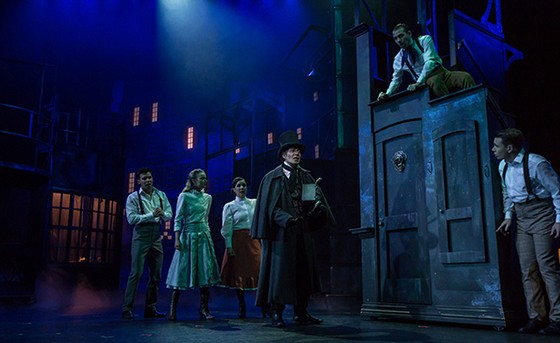 Eugene Gilfedder, who has been too long absent from the Brisbane stage, made a magnificently mean Ebenezer Scrooge – his heartless, oft used, quote “It’s got nothing to do with me”, so beautifully delivered, is already a catch-cry in the Scott household.

Then another of Brisbane’s finest, Brian Probets was sheer genius in his interpretations of Jacob Marley’s chain rattling ghost and the spirits of Christmas past, present and future. He was hilarious and scary in his dead man’s pallor and amplified voice. He also used some equally funny accents in his haunting of Ebenezer. Ross Balbuziente, Arnijka Larcombe-Weate, Nelle Lee, Nick Skubij and Lucas Stibbard played everything from carol singers to busy people walking and trying to stay warm in the bitter English winter.

They also doubled as the Cratchet family and the other featured characters in this tale of haunting and redemption.

They all proved to be highly efficient scene changers too, for Josh McIntosh’s movable and nicely interlinked set changed location after location. It was this, plus the costumes that set the show right in the middle of England in the Victorian era. The setting was completed by great lighting from Jason Glenwright and soundscape from Chris Perren plus the eerie and often scary video holograms that blended with real life actors. This was magically created on the huge back screen by Craig Wilkinson. It was a unique collaboration that ran seamlessly for more than 80 minutes.

The story opens on a cold and gloomy Christmas Eve. Ebenezer Scrooge is spending his evening hunched over his coals, counting his fortune and making life difficult for poor Bob Cratchet. Then, after a night of ghostly visitors, each with an important lesson for Scrooge, he wakes up on Christmas Day with a whole new outlook on life. 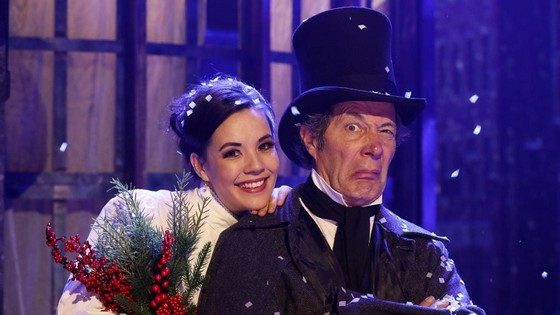 The show itself opened with on-stage carol singers entertaining the assembling audience and ended with gently falling snow.  Salliana Campbell played the carol music on her violin and then created some highly effective sound effects too.

I sat entranced all the way through and I would highly recommend it for the entire family – if you can get tickets for apparently it is selling out the Playhouse Theatre very quickly, which is an indication of the regard shake&stir is held.