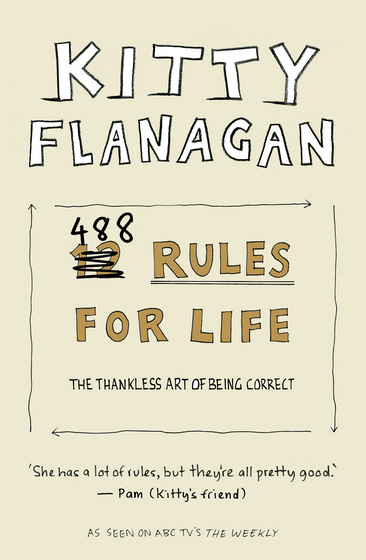 As the author herself explains first up, having a dozen rules for life seems a bit light on.  Humans are complex beings, and we’re not all blessed with common sense either hence there wouldn’t be the need for as many as 488 Rules for Life to be laid down by the pen of the ever-sensible Kitty Flanagan.  For those that are lucky enough to already possess spades of sense (or even just a spoonful), this will be a very life affirming book  to read.  You are not alone.  That should be a comfort.

For anyone who has ever watched a server try to negotiate a tray of boiling hot coffees safely around a nest of prams in a busy café, take heart.  Kitty Flanagan has noticed.  The plight of those forced to work in open plan offices, subject to the auditory and olfactory soup that is generated by too many people occupying the same space for at least eight hours a day, that horror has been keenly observed as well.

Broken into sections that cover such areas of life as Around the Home, Health and lifestyle, Exercise Gear, Working Out, Kitty Flanagan’s 488 Rules of Life breaks down the little practices that are important to observe if one cares enough to try and live their life as a largely inoffensive human being.  But it appears, as any commuter, shopper, office worker or parent would know (and everyone else currently identifying as a homosapien), it truly is best to try and live your life by these rules so as to not cause offense in random encounters, get fired, score badly in your personal relationships or royally piss off the neighbours.

Immediately after reading the is book, I had to text my sister and tell her that she was indeed guilty of multiple childhood accounts of ‘poncewobbling’. And no, it is nothing what you think it might be (hoarding your treats – such as showbags – and then bringing them out way later to make your siblings quite jealous of your self-control).

As we have all known since the early days of Flanagan’s stand-up comedy, this is one keen observer of the masses who is adept at saying what we have always thought but have perhaps not yet voiced out loud (or else we’d be harping on all day as the Rules are broken all around us that frequently).

Flanagan explains that this work was birthed in response to viewers of her segment on ‘The Weekly’ (ABC TV), inquiring as to a book about rules that they had heard referenced on the show.  It hadn’t actually been written at that stage, so it seemed like a very clever idea to nail all the wisdom down into one book and get it published.  488 Rules for Life is Flanagan’s second book.  It’s about a two-seating read, and as it is so spot on you will find yourself ripping ahead to see what else you can violently nod your head in agreement to.  This book was read as an eBook and you can’t help but hear Flanagan’s warm and wise voice in your head, cajoling you along the path to enlightenment.

Kitty’s Flanagan’s 488 Rules of Life; The Thankless Art of Being Correct is published by Allen and Unwin.  Buy it for those who need the help.  That of course won’t be you.