The triumphant triple bill 4 Seasons won rapturous applause at its opening in Brisbane. A mix of dancers and choreographers from Hong Kong and Brisbane combine to create three performances intertwined by the title and yet so totally different in delivery. There were 20 dancers, six from Expressions Dance Company and 14 from Hong Kong City Contemporary Dance Company.

Each episode told a story. Each story was easy to follow in the performance. 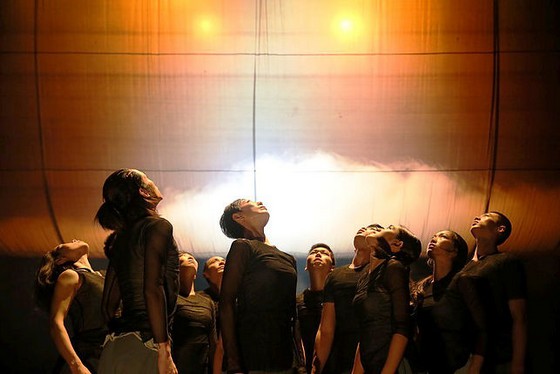 The opening piece was “Summer”, created by Kristina Chan and danced by CCDC. It was a dark and forbidding look at a future dominated by global warming. It was a summer where humanity was roasting under a blazing sun or being blasted by the fury of monster storms.

Dim lighting, doom-laden music, and much slow motion dancing showed the effects of the heat and humidity. Wilting bodies, breath coming in gasps as the dancers, all darkly clad, suffered under the relentless blast of the Sun. That Sun was cleverly represented here as a menacing orange curtain that billowed as it slowly dropped from on high to finally envelope the struggling people.

We saw and felt the fear and hopelessness of this future and the timely message being sent to today’s world. It was a depressing thought. It was apocalyptic choreography, difficult at times but brilliantly executed by very talented troupe.

Dominic Wong’s “Day After Day” was a complete change of mood. Energetic and frenetic dancers, dressed in modern street gear. leapt, lifted, swung, and tossed around their ever-moving partners. It was a magnificent display of contemporary dance.

The choreography was about changing seasons, not only climatically but in human emotions as well, with sad departures and happy reunions. But all the time positive and vibrant, as it slickly switched moods to an amalgam of electronic sounds that suited the mood of the piece perfectly.

And as an added piece of choreographic brilliance Bruce Wong, dimly lit in the background, walked around the fast-moving action in staggering slow motion. It was a perfect counterpoint to the rest of the dance. The physical discipline needed for such a feat would have been phenomenal let alone the timing of the steps. Top marks for this.

After interval it was time for Natalie Weir’s “4 Seasons”, danced to Max Richter’s recomposed version of Vivaldi’s best known composition. It’s not the Four Seasons we know, that was for sure.

I never fail to be impressed with Weir’s work; she blends the classical feel with contemporary dance magically. This was no exception and we saw EDC at their best. 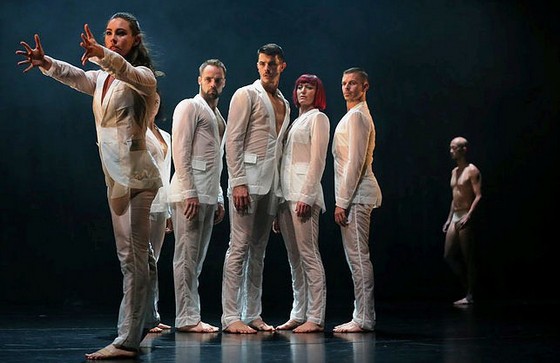 It was four seasons of human life, where four couples danced through the seasons of life together from tempestuous spring to the darkness and old age of winter. The lifting and leaping and the many pirouettes called for heaps of energy and precision movement from the group. It was dance that needed strength, stamina, and trust and that’s what we got. It was a breathtaking production – from the clever classic line costumes worn by the women in four different colours to some unbelievable tumbling and acrobatics

It moved so quickly and was so absorbing that it seemed to be over almost before it began but it was a satisfying and life-affirming journey.