23 Walks promised much but delivered little. It ends up being scenic but manufactured pap for the elderly. 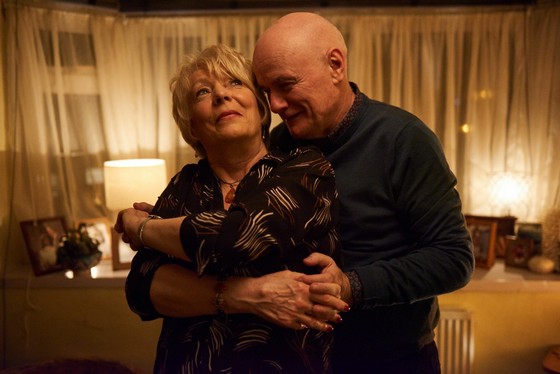 Two lonely people connect after a shaky start and try to make something of their relationship. Of course, it wouldn’t be a movie without a number of obstacles. Dave (Dave Johns) is a retired mental health nurse with a couple of grown up children, including a bossy daughter. Fern (Alison Steadman) is a part-time secretary, who also had a couple of kids. He’s longing for companionship and a meaningful involvement. She’s wary, fearful of getting hurt again and subject to mood swings.

As the film’s title suggests, as Dave and Fern continue to meet up over time with their dogs, gradually their number of walks together mount up. But both are holding on to secrets, which threaten to derail any lasting bond.

Try as I did to enjoy and give myself over to 23 Walks, I couldn’t shake the feeling that I was being taken for a ride. Undoubtedly the best thing about it was the setting (woodland in north London) as captured by cinematographer David Katznelson. Unfortunately, the picture-perfect surrounds aren’t anywhere near enough to overcome the clunky, cliched scripting. That is the work of Paul Morrison, who also directs his first feature in more than a decade. The whole thing feels staged, rather than natural and free flowing.

Good as they may be in other vehicles, Johns (I, Daniel Blake) and Steadman (Gavin & Stacey) frequently appeared to be delivering rehearsed lines.

While I don’t doubt that 23 Walks will appeal to some, I believe they’ve been short changed. I’m afraid I was left disappointed by what could – arguably should – have been something decidedly more special.